Spread across the Western Pacific Ocean, the four states of the Federated States of Micronesia include Yap, Chuuk, Pohnpei and Kosrae, and comprise more than 600 islands. The combined land mass of Micronesia is smaller than that of Luxembourg and only a few of the islands are inhabited, with the former capital of Kolonia on Pohnpei the most populous city.

The island of Yuk is renowned for its healthy mangrove canals and gigantic stone money, together with a lively annual festival of traditional dance and music. Chuuk is perhaps most famed for the magnificent Chuuk (or Truk) Lagoon, with around 100 wrecks littering the ocean floor, including the famed Fujikawa Maru. On Pohnpei you can ride Micronesia’s most legendary waves and soak up the ancient history at the archaeological site of Nan Madol, then trek to the rocky outcrop of Sokehs Rock to take in the sweeping views. Kosrae is famed for its national marine parks, which protect not only a rich marine biodiversity, but some of Micronesia’s most important tracts of primary forest.

While travel through the archipelago can be challenging, with few means of public transport and flights being the easiest way of getting around, Micronesia remains well off-the-beaten tourist track and refreshingly authentic.

Micronesia’s location in the Pacific Ocean results in a tropical climate, with two distinct seasons and hot, humid conditions throughout the year. June through to December is considered the wet season, with the majority of rainfall during these months, particularly in Pohnpei which is one of the wettest places on earth. Micronesia sits just on the southern edge of the typhoon belt, but occasional storms do strike the islands during this period also.

The months of January through to May experience drier and slightly cooler conditions, although rain should be expected throughout the year. This is the best time to visit Micronesia, and with tourism numbers still relatively low across the archipelago, you won’t be hit by hotel and resort price hikes for taking advantage of the best weather conditions.

If you are coming to surf in Pohnpei, then the best conditions are between October and April.

Although imported foods are starting to replace traditional dishes throughout the archipelago, Micronesia’s rich culinary traditions are always on show during ceremonies and festivals. The cuisine is largely based around seafood and root vegetables, together with tropical fruits.

Breadfruit features heavily in Micronesian dishes, with a starchy texture that can be mashed, steamed, baked and fried into chips, much like potatoes. Traditional breadfruit salad is a particular favorite, combined with beans, onion, tomato, cabbage, cucumber and meat.

Seafood is the main source of protein in the islands, with an abundant supply of fish and shellfish, particularly crabs and clams. A must-try Micronesian specialty is raw fish dipped in a peppery sauce! Chicken is also reared by many locals and transformed into a dish known simply as Micronesian chicken - grilled chicken breast marinated in lemon juice, beer, soy sauce, onion and garlic - while pork remains another popular meat.

The main source of carbohydrates across the islands is yam, with the root vegetable holding an important place in Micronesian culture. There are more than 100 words for yam on Pohnpei alone and they are grown to an immense size. There’a a huge variety of different yam dishes on offer, but koapnoair koakihr – ground yam cooked in coconut milk - is one of the most delicious.

In traditional Micronesian custom, no deal is made without drinking sakau - a slightly narcotic beverage made from pepper shrub roots. It’s known as kava across many Pacific islands, with the roots pounded into a paste which is then filtered through hibiscus bark and mixed with water.

Truk Lagoon - Part of the Caroline Islands group is the magnificent Truk Lagoon, whose numerous shipwrecks covered in coral have made it a diver’s paradise. The Fujikawa Maru is the most famous, with this Imperial Japanese Navy vessel being sunk during Operation Hailstone in 1944. But there are more than 100 planes, ships and submarines which now lie on the sea floor and nowhere in the world has so many wrecks to dive in such close proximity. You can base yourself at one of the dive resorts near the town of Weno or opt to explore the Truk Lagoon on a dive liveaboard.

James Palsis Marine Park - This community-run conservation area between the villages of Tafunsak and Walung is one of Kosrae’s most beautiful and bio-diverse areas. The deserted beaches lie on the edge of marine species-rich coral reefs, while the interior forest offers excellent hiking and bird watching opportunities. There are BBQs and picnic huts to prepare lunch and an endless array of activities to keep you busy along this magnificent stretch of coastline.

Utwe-Walung Marine Park - The first area in the Pacific to be recognized as a UNESCO Biosphere Reserve was the Utwe-Walung Marine Park on Kosrae, home to both a healthy coral reef and one of Micronesia’s most pristine stretches of jungle. It was established by Madison Nena, an indigenous and award-winning local ecologist who successfully prevented a tourist complex from being developed and works alongside local elders to build traditional Kosraen houses. A highlight of the marine park is the beautiful backwater mangrove channels which border the ocean, with canoe tours an ideal way to explore both the natural and cultural history of the area.

Sokehs Rock - Perhaps Micronesia’s most iconic geographical feature is Sokehs Rock - an exposed outcrop of basalt that juts out from Sokehs Mountain on the island of Pohnpei. It was here than un uprising was led by the islanders in 1910 against German colonial rule, with several hundred Sokehs being exiled to Palau. The two-hour trek to Sokehs Rock takes you through dense tropical jungle dotted with World War II relics, opening out to a breathtaking view across Pohnpei and the harbor town of Kolonia which lies below.

Nan Madol - Serving as the capital of the Saudeleur Dynasty until the early 17th century, the ancient city of Nan Madol now lies in ruins off the southeastern coast of Pohnpei. The name translates as “spaces between” and refers to the canals that link the 100 artificial islets on which the 1000-year old city was built. The megalithic stone architecture that stands today served both political and ceremonial purposes, with the immense basalt rocks believed to have been transported to the city on rafts.

Yap - While Yap doesn’t boast as many beaches as other islands in Micronesia, it is renowned for its snorkeling and scuba diving, with plenty of healthy reef surrounding the four main islands of Yap, Gagil-Tamil, Maap and Rumung. But for many visitors, it is the rich culture of Yap that is the biggest allure, particularly the gigantic stone money known as “Rai of Yap” which are displayed outside villages. The Yap Living History Museum in the main town of Colonia is a good place to start, or join a guided cultural tour to immerse yourself in the local island life.

Mount Finkol - The highest point on Kosrae is Mount Finkol, rising to 630 meters over what is one of the world’s rainiest islands. Experienced hikers can tackle these challenging conditions with a local guide, but should be prepared for sudden downpours and slippery, muddy conditions. The rewards from the top are spectacular views out across the fringing coral reefs and surrounding islands of Micronesia.

The official and most widely spoken language in Micronesia is English, although there are numerous other indigenous languages spoken across the archipelago. Among these are the Nuclear Micronesian languages, including Marshallese, Gilbertese, Chuukese, Pohnpeian, Kosraean, Carolinean, and Ulithian. These belong to the Austronesian language family, with Nukuoro and Kapingamarangi belonging to the Polynesian sub-group. Chamorro is also spoken, but more closely related to Filipino and Palauan, and part of the Indonesia branch of the Austronesian family.

The official currency of Micronesia is the US Dollar, although Japanese Yen are also accepted on many of the islands. Credit cards, including Visa, MasterCard and American Express are accepted at most tourist resorts and travel agencies, with a scattering of exchange facilities available across the islands. There are very few ATMs in Micronesia, so always bring plenty of US Dollars with you.

In addition to routine vaccinations, diphtheria, hepatitis A, hepatitis B and tuberculosis are all recommended, as well as Yellow Fever which is mandatory for anyone traveling from an infected area.

The level of health services and medical care in the Federated States of Micronesia is relatively high, with numerous health clinics outside of the major cities. Health care is not free, however, and cash payment is often requested by doctors and/or hospitals. Some conditions may require evacuation to Hawaii or Guam and comprehensive travel insurance is highly advised for travel in Micronesia. If you are scuba diving, then keep in mind that there are only three decompression chambers throughout the entire archipelago.

Water is not always safe to drink on the islands and filtered or bottled water is recommended.

Crime levels are very low throughout the Federated States of Micronesia, but pick-pocketing and muggings are not unheard of in urban centers. 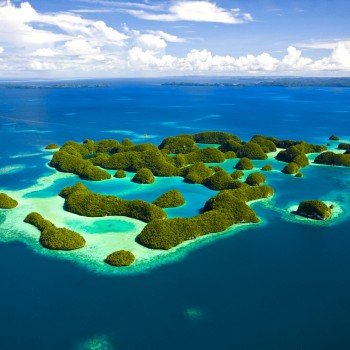 Micronesia
Be First to Review