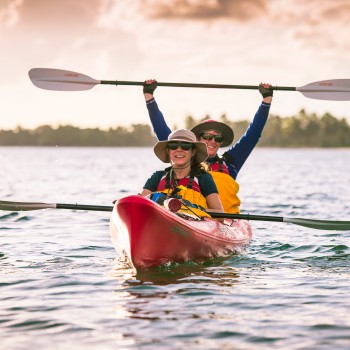 Cuba flips the paradigm, and on the other side of the island you can find the wild wild east…for now. Compared to Central and Western Cuba, Eastern Cuba (or Cuba’s Oriente) is a little more raw. A little more unrestrained. A lot less visited.

Join us on the first-ever kayak and walking tour of Eastern Cuba and discover why Christopher Columbus laid his eyes on the region and declared it “the most beautiful land human eyes have seen.” Though time has passed since 1492, the Oriente still embraces winsome coastlines, tranquil rivers, and striking mountains. The towns are no less vibrant, and their lack of infrastructure and tourist trappings only add to its unadulterated allure.

Our 12-day People-to-People tour takes you from Holguín to Santiago de Cuba, giving you an immersive experience in Eastern Cuba’s most legendary towns. Holguín and Gibara’s cobalt bays first caught Columbus’ eyes, and as you stand by the several statues commemorating the legendary explorer you can imagine what it must have felt like to lay eyes on the island long ago. We follow the steps of Buena Vista Social Club’s famous song “Chan Chan” and make our way to Mayarí.  We also wander through the surrealistic African safari island of Cayo Saetia where zebras and buffaloes roam. We soak in wild Baracoa’s je ne sais quois while also visiting dramatic river canyons. We feel the way Santiago de Cuba moves to its own tempo: it’s more frenetic, more keyed up, more exposed than other Cuban cities. Our tour of Eastern Cuba takes you off the smooth tour track and allows you to dive deeper into Cuban culture, dig deeper into its history of rebellion and repression, and look deeper into Cuba auténtica.  For those who wish we also offer an extension to Havana at the end.

A scene of natural beauty is a story written over scores of years, a character formed by storms and sun. Let Cuba tell you its story on our Eastern Cuba Kayak tour!